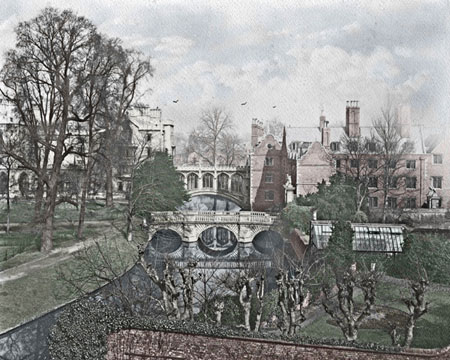 
Cambridge Revisited is an ongoing project set up to inject new life into archive scenes of Cambridge dating from the 1860’s onwards using photoshop software. In some of the earlier work where the cameras and emulsions could not capture the scenes as the photographer may have seen them, a certain amount of artistic licence has been taken in transforming them from mere records to pleasing photographs. I have also started to apply hand colouring techniques to some of the older images and may do more. Let me know what you think!
In the early years of the last century, one photographer, Frederick Sanderson, working in the business of Palmer Clarke, manufactured his own camera to improve his images, and the iconic polished wooden Sanderson Camera is now a valued collectors item.
It was probably Sanderson who used to retouch birds into his “manufactured” skies, and in some photographs, the birds remain.
From the early 1930’s the studio was run by Ramsey and Muspratt, who continued the work of this portrait studio, but in their own particular style.
The collection is a valuable insight into Cambridge life, and a timeless record of its enduring charm and character.
About Archive
PreviousNext